Which Plant-Based Milk Is Perfect for You?

Not everyone could drink dairy milk. Some of us are lactose intolerant. Some of us are vegan. These reasons gave rise to the popularity of plant-based milk. In recent years, everyone has been drinking almond milk lattes. Then oat milk took center stage. The Oatly Milk craze led to skyrocketing sales of oat milk. In 2017, sales went up from $4.4 million to $29 million.

Every type of plant-based milk has its own levels of sugar, fat, and protein. It’s fortified with different vitamins and minerals.

Milk in Our Daily Diet

In one cup of whole milk from a cow, there are 149 calories, 7.5 grams of protein, 12 grams of natural or added sugar, and 4.5 grams of saturated fat. Growing up, we were taught to always drink milk. We had some milk with our cereal. Milk cartons are part of our government-approved lunch trays at school. We drank warm milk before going to bed. Even as adults, milk never left our diet. It became part of our lattes and teas. It became part of hearty meals such as overnight oats and cream-based pasta. It’s a basic component of our diet, much like bread.

We were taught that it’s full of calcium and that calcium gives us strong bones. Our bones carry 99% of the calcium in our bodies. But the other 1% of calcium leads to many other health benefits to our blood, muscles, and other tissues. It helps to contract and relieve muscles. It regulates heart rhythms and nerve functions. It’s vital in blood clotting. Drinking milk makes sure that our visit to the chiropractic clinic to won’t go to waste.

Since not everyone can or want to drink dairy milk, here is a breakdown of the nutritional components of the five most popular plant-based milk.

This milk grew popular partly because of its nutty flavor, creamy consistency, and low calories. There are 35 calories, one gram of protein, and zero grams of natural or added sugar and saturated fat in one cup or eight ounces of plain almond milk. But almond milk is made from almond nuts that diluted in water. This process lowers the protein content of the milk. But almond milk makes up for this by fortifying it with other vitamins. In particular, it’s high on vitamin E.

Oat milk is a great alternative for those who are lactose intolerant and have nut allergies. Its popularity is attributed to its slight sweetness and consistency that’s similar to skim milk. Plain oat milk has 60 calories per cup or eight ounces. There’s also one gram of protein and zero sugar and fat. Although it’s also quite low on protein, it’s high on fiber. It has two grams per cup. It’s also high on iron, vitamin E, and folic acid.

Although almond milk and oat milk are quite popular, soy milk has been a longstanding alternative for dairy milk. A cup of plain soy milk has seven grams. Cow’s milk has almost the same amount of protein. But it has a lower amount in other components. There are 80 calories, one gram of natural sugar, and 0.5 grams of saturated fat. It’s high on omega-3 fatty acids and fiber. Most companies fortify soy milk with vitamins A, D, and B12, and calcium. 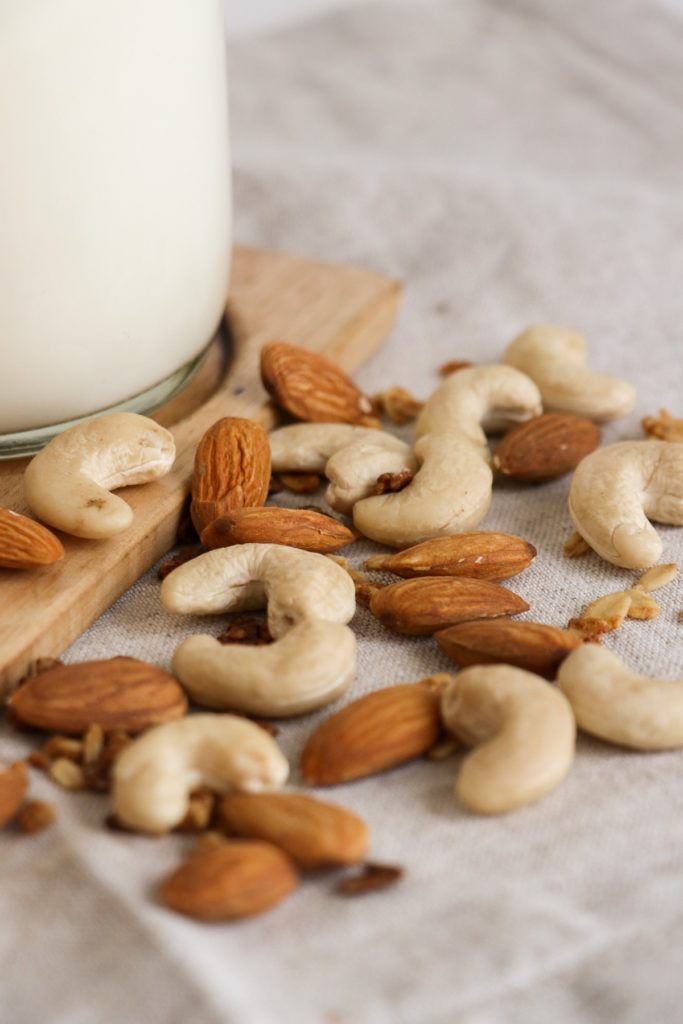 As another nut milk, cashew milk is also low on calories, protein, sugar, and fat. There are 50 calories, one gram of protein, zero grams of sugar, and 0.5 grams of fat per every cup or eight ounces. People are attracted to cashew milk because it’s quite creamier than almond milk. It’s also a popular choice for those who have almond milk allergies. Although it’s also low on protein, manufacturers fortify it with almost 50% more calcium than cow’s milk. It’s also high on vitamin D and E.

Unlike other types of plant-based milk, rice milk is a little high on calories. In every cup, there are 70 calories. But it’s low on everything else. It has zero grams of protein, less than one gram of natural sugar, and zero grams of fat. But it’s still a popular choice among those who want hypoallergenic milk. It naturally has low calcium. But manufacturers fortify it. They also add vitamins A, D, and B12. Since it’s made of rice, it’s also high on carbohydrates.

It can be hard to choose which plant-based milk you should buy. The milk section at your local grocery store is full of various types and brands. It has different flavors and levels of sugar. At the end of the day, the most important thing is that your decision is based on health. It’s important to buy a type of milk that’s best for what your body needs.